Seapoose is an anglicized spelling of the Shinnecock Indian word “little river.”  When a cut is made in the barrier beach separating a bay from the ocean, the cut quickly becomes a little river.  Bay water runs out at low tide and the ocean runs in at high tide.  This cut can occur naturally during storms or can be created by man.

The Shinnecocks are believed to have dug the seapoose at Mecox Bay, Water Mill to keep the salinity of the bay appropriate for shellfish, which they harvested there.  The Shinnecock language was not recorded so we have no record of how they pronounced Seapoose but Southampton Town clerks recorded the word as sea puse, sepoose, sepose, seapoos and other variations.

The first mention of the cut in Southampton Town records was made in 1644 when the agreements were worked out with the Town for the building of a water mill at a pond and creek north of Mecox Bay.  The records note that “every one in the say’d  towne from 16 yeares old to 60 (except Magistrate, Minister, Miller and heardsmen) in their own persons shall bee ready so often in the yeare to cutt open sufficiently a gut at meacoxe.…”  For the water mill to operate properly, water downstream of the mill had to be kept low.

Town records indicate the seapoose was frequently a heated discussion at town meetings as colonists involved with their own farms were not willing to leave their work to open the cut. A November 1652 entry states that,

“Isack Willman in a passionate manner said that some of them that voated for the raising of the mill knew noe more what belonged to the sepoose than a dogg.”o

The seapoose has been dug by hand and animal labor.  On display at the Water Mill Museum is the old horse-drawn sand scoop once used to make the cut.  Frank Benedict in a September 19, 1905 diary entry states,

“Seapoose, verry high beach but 5 teams done it in afternoon”

Today machinery is used to dig the seapoose and the Town Trustees determine when. They get lots of advice from baymen who want to let salt water in to encourage shellfish; from homeowners who live around Mecox Bay and Mill Creek and are concerned about having their land and cellars flooded/ and from recreational boaters who want a high water table. 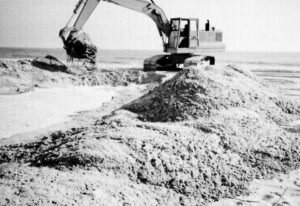 When the seapoose is running Water Mill bathers enjoy floating down the little river probably much as Shinnecocks did on a hot summer day.

Your ticket for the: The Seapoose